The following is my write-up for the first Intigriti XSS challenge of 2021.

I discovered two solutions, the intended one and an unintended one, both of which were accepted by the challenge creators. These are documented below.

Here’s my analysis of the script, section by section. I’ve assigned numbers to each part of the script to make it easy to reference later.

This reads the r query string parameter from the current URL into the window.r variable.

This code looks at all variables of type string within both document and window scope, and removes anything containing the word javascript (specifically in lower case). It appears the author’s intent was to remove “malicious” links i.e. javascript:alert('h4x0r3d').

When the page loads, an onclick event is assigned to each anchor tag on the page, overriding the default behaviour with something new. Instead of links being handled in the regular way when clicked, the safeRedirect function is called on the href of the anchor tag instead.

If the r value is defined, call the safeRedirect function on this value. Presumably then, the r parameter can be used to redirect to a given URL.

The safeRedirect function takes a URL. If the URL contains any of <,>,",', (space), an alert box is shown with message “Invalid URL”, and no redirect occurs.

If these characters aren’t included in the input, the function changes the content of the “popover” div to some templated HTML. This contains a message telling the user about the URL they are being directed to, which includes the unescaped URL that was passed to the function. It also includes a link to the URL to click on in case the redirection fails - but this link is hidden by default.

After 5 seconds go by, the action continues. If the provided url begins with https://, a redirection to that URL occurs, by setting window.location directly. Otherwise, window.location is set to window.origin, followed by a slash, and the input URL - this is intended to handle relative URLs.

If another second passes before the redirection occurs, the link to the URL is displayed instead.

Right, that’s how it all works, let’s break it!

The first solution ends with the abuse of the following line:

If we can set window.origin to an arbitrary value, we could cause a JavaScript payload to run here.

The trouble here is that origin is a special value which is preset by the browser, so it’ll always be set.

We need to first unset this special value, and then create an element with an ID of origin to set our own arbitrary values.

Remember part 0x02 of the script? If a value contains the word javascript, the variable gets deleted.

Intigriti left a clue to help with this on the program page:

The scope mentions *.challenge-0121.intigriti.io - meaning subdomains may be included!

A quick test shows the site is using wilcard subdomains:

Therefore, if we use javascript.challenge-0121.intigriti.io as the domain, the origin variable will be removed from window. A quick test shows it works:

Now to create an element with an ID of origin in order to set our own value.

Looking back at part 0x05 of the code shows:

We saw that <> characters are checked for, so it doesn’t look like tags can be injected in the first ${url} instance. The second instance occurs inside a tag attribute, and the attribute is unquoted! Spaces are checked for too, so we need to separate attributes with other characters such as tabs (%09) if we want to inject attributes.

Injecting a payload of hello\tid=origin would result in:

When the <a> element gets converted to a string, the href attribute will be used.

To get an XSS, we could redirect to something like javascript:alert(1337), but variables are removed which contain javascript. There’s an easy workaround for that: chuck some uppercase characters in there. jAvAscript should do it.

The full URL that is generated is done using:

It works! The original challenge rules stipulate that we need to alert the string {THIS_IS_THE_FLAG}, but we can’t use either types of quotes to delimit the string because of the filter at the top of part 0x05.

To work around this limitation, we can use String.fromCharCode. This function takes a series of ASCII codes and returns a string representation of them.

Building this into our payload gives: 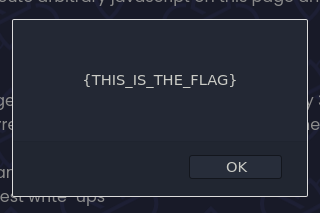 There’s a quick’n’dirty solution available too, albeit an unintended one. It requires interaction, but only minimally so, in fact just a mouse movement anywhere in the window. If the cursor is already within the window bounds, no interaction is even required!

In part 0x05 of the code you’ll notice the message containing an anchor tag is shown a second after redirection occurs, in case the redirection fails for whatever reason.

We can cause this to happen by passing a URL which will always time out, I used a fairly randomly assembled https://8.8.8.8:80.

As we established in the first solution, we can add arbitrary attributes to the <a> tag shown here. First we add CSS which makes the anchor tag fill the whole browser viewport:

Finally we add an onmouseover event…

…and try it, which pops the alert box:

Thanks Intigriti for another fun challenge. The use of the subdomain to filter the origin value was pretty unique!

The following is my write-up for the March 2021 Intigriti XSS challenge. Let’s Get Started… The challenge takes place on a single web page, though this one appears more dynamic than those I’ve ...

I’ve been getting into XSS challenges over the last few weeks and BugPoc recently announced a nice tough one: Check out our XSS CTF! Skip an Amazon Interview + $2k in prizes!Submit solutions to be...